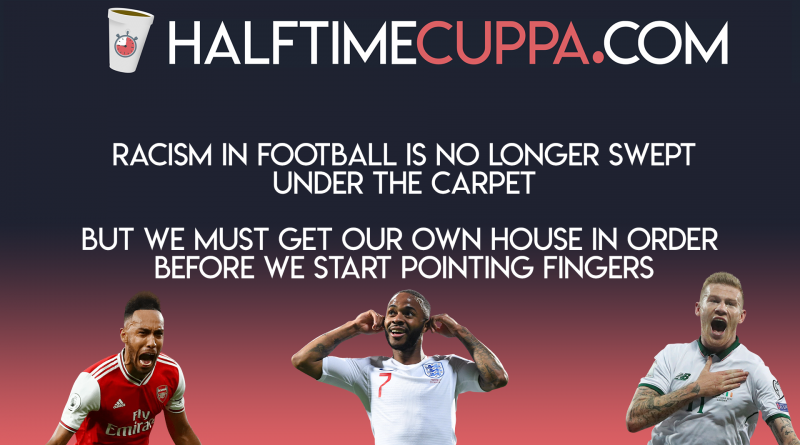 Football has come a long way in the fight against racism since the eighties. Gone are the weekly accounts of racism towards black players coming from the terraces in grounds across England and, it is an understatement that everyone connected to the game is thankful that those ugly scenes from the past are almost an ugly relic from football’s past.

I say almost because as much as we’d like to think the game here has become a sport anyone of any race or religion or skin colour can enjoy without the worry of being abused for being any of the three I’ve just listed.

The English game and perhaps the British game as a whole still needs to do more to stamp out outdated and gross mindsets some people unbelievably still have today. Over the last few seasons these ugly attitudes have reared their heads in England’s top flight, Raheem Sterling and Arsenal’s Pierre-Emerick Aubameyang have experienced notable racism incidents, Aubameyang shockingly had a banana thrown at him by a Tottenham fan during the North London derby, while Sterling was verbally abused at Stamford Bridge whilst playing for Manchester City.

Both incidents echoed the dark past English football would love to forget but when prominent black players such as John Barnes and the late Cyrille Regis experienced virtually identical abuse you have to think and say to yourself how far have we actually come to battle racism when these ghosts from the past come back to haunt us?

The racial abuse England suffered last Monday was obviously a disgrace and although I believe they handled themselves with immense dignity, I believe they should have walked off the pitch.

Uefa have been incredibly weak in my eyes when it comes to dealing with racism in the past and I can’t see them changing unless drastic action is taken by a team club or country.

Apparently one of the dangers of walking off the pitch and not returning for the remainder of the game is that UEFA deems that action as the team forfeiting.

England were in no real danger of not qualifying for Euro 2020, given the current talented team and their standing the group next summer’s championships were virtually secured.

Last Monday’s game was the perfect chance to take a stand and not return, England were already 3-0 up and should have they not returned and UEFA had awarded the game to Bulgaria I believe there would have been an outcry in the sport and socially because to me if they acted like that it would make it clear that they are inept to deal with racism.

Returning back to the game here there have been numerous incidents of racism based around a player’s religion but this version of racism not only targets players but also fans too.

Tottenham Hotspur as everyone who knows their football have links to the Jewish community. The word “Yid” is commonly used by football fans to describe Tottenham fans where the original meaning of the word is slang for a Jewish person usually used by antisemitess.

Tottenham’s main rivals Arsenal and Chelsea have been accused of using Anti-Semitic language in chants during games between the sides, with the latter actually launching a say no to antisemitism campaign after a few unsavoury anti Semitic incidents including a video of Chelsea fans singing a parody of the the Chas and Dave hit Ossie’s dream (Spurs are on the way to Wembley) which featured the lines “Spurs are on the way to Auschwitz, Hitler’s gonna gas them again”. The FA, clubs and The Premier League have taken steps to help tackle this form of racist abuse but I believe there is still a long way to go.

Across the border, in Scotland, they are used to dealing with abuse of a religious racist nature. The Edinburgh Derby between Hibernian and Heart Of Midlothian has had its fair share of sectarian incidents, but the majority of sectarian incidents come from the Old-Firm derby between Celtic and Glasgow Rangers. Celtic’s support is generally Catholic with links to Irish republicanism while Rangers support is mainly Protestant with a loyalist background. During the derby’s songs and chants are often songs throughout the games. In the past, the SPFL have taken sanctions against both clubs and investigated allegations of sectarianism thoroughly.

Sectarianism is something English football never truly experienced until Irish footballer James McClean refused to wear a poppy on his shirt, a stance he has always taken during his career whilst playing in England. McClean is from Derry in the north of Ireland and is probably the most prominent Irish Republican in English and British sport at the minute. He refuses to wear poppy based on his experiences as a child growing up during the troubles and because of the British Army’s actions in Derry’s during that dark period, which included The Bloody Sunday Massacre. I myself am from an Irish Catholic background and would classify myself as an Irish Republican.

I believe there is a lack of education in this country when it comes to the history between Britain and Ireland and as such, it results in sectarian abuse that McClean receives from the terraces because of his stance.

Being an Irish Republican does not make you pro-IRA or anti-British and the claim that I’ve seen on social media he is disrespecting Britain’s war dead is ludicrous. People fought for the freedom of speech against the Nazi’s but it seems that there is an outrage when somebody speaks out and their opinion isn’t one widely shared and as a result is abused for their beliefs.

With remembrance day soon approaching McClean will be bracing himself for more abuse directed at his race. religion and his beliefs and perhaps this is because I’ve suffered sectarian abuse myself is why it’s such a topic I care about.

McClean shouldn’t have to defend his decision and release a yearly statement on why he doesn’t wear a poppy. The media and even football fans who disagree with his views should just accept that he will never change his views.

But without the proper education on why he doesn’t wear a poppy the abuse of McClean won’t just fade away, the same goes when it comes to antisemitism and abuse against black players.

Education is key, without it we don’t grow and develop as people. The FA, The Premier League and Kick It Out have done a lot of good combating racial discrimination. But they and we as football fans and people can do a lot more combating all forms of racism.

Our national side made a statement last Monday night and as we press to make a statement on the international stage but, we must remember to get our own house in order before we dictate how other footballing bodies deal with racism. 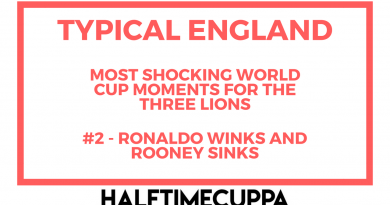 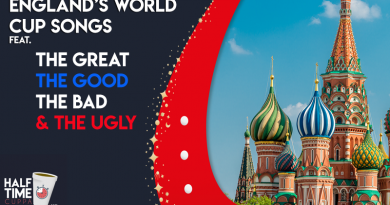 England’s World Cup Songs: The great, the good, the bad or the ugly

Half Time Podcast #4 – Could England Win Another World Cup?